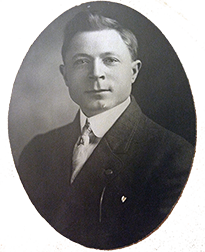 In 1884 Gustav G. Schell Sr., a German immigrant, moved to the United States and settled in Columbus, Ohio, with his father at the age of six. Gustav was married to Flora Trautman in 1898; the couple had seven children – Dorothy, Herbert, Norma, Carolyn, Betty, Gustav Jr., and Robert.

Near the turn of the century Gustav was employed at Ambruster Scenic Studios in Columbus. After several years of training, the young man opened his own small scenic design studio at the Empire Theatre on East Gay Street in Columbus in 1904.

All of the children grew up around the studio. The girls helped with sewing while the boys worked in the shop.

Gustav Jr. (Gus), and Herbert were most actively involved in the business. Gus started in the shop at the age of eight, cleaning paint brushes, and since graduation from high school worked in the theatrical industry. Herbert worked as a carpenter in the shop after graduation from high school in 1928. Then he left the company to become the first stage manager at the Ohio Theatre in Columbus. He held that position until 1956 when he assumed the position of stage manager at the newly opened Veterans Memorial Auditorium.

When the studio opened, its inventory was primarily backdrops, draperies, and advertising curtains. Today, the studio offers not only one of the midwest’s largest inventories of scenic backdrops but also offers a complete selection of theatrical equipment. As technology changes, so does the studio’s inventory. 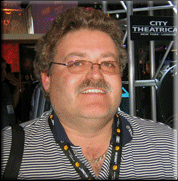 Philip, the third generation in the Schell Scenic Studio family tradition, believes in the philosophy of offering the customer courteous and personalized service.

The Schell Scenic Studio looks forward to carrying on the family tradition of offering fine quality products and service, established by our founder, to today’s customers.

Schell had the hard-to-find lamp I needed in a pinch and were courteous and professional to boot! Phil took the extra time to physically confirm inventory before I sent my tech 2 hours to pick up. Thanks!

A family tradition of serving the theatre community since 1904.

We look forward to serving you. If you have any questions, please contact us.